On this page I will write some stories: sweet, special, incredible, funny or sad.

January 2016 late afternoon at Pede beach in Labuan Bajo and waiting for the sunset. This is one of my faves. Not the beach but the views of the sun colouring the sky in multishades in pink, orange, blue, grey and purple. We have to find some good positions for taking the nicest pics.

The subject? Oh, yes, I almost forgot as the sun, sea and sky takes my full intention. We have to be careful to wander around. A bit to the left, forward, to the right, back again. Carefully. Not only for the right position but to get our feet between the rubbish of plastic bags, plastic bottles in alle shapes and sizes, a sandal and again bags and bottles, a simcard, a toothbrush… and bags an bottles.

6 pm. The sun is going to sleep leaving us a with a memorable view and take the litter out of sight as it becomes dark. Who cares. Within 12 hours the sun will wake up again showing us a wonderful island - and - sea scenery and…. the plastic. Day after day, year after year, 10 years, 100 years….

It's still dark in the clear bay, cool wind in my hair....The beginning of a wonderful day. In front of us a calm mirrorlike sea. Black and shiny. Of course the sun has to wake up first which she does with her light orange colours lighting up Komodo National Park, the western part of Flores. Zooming in on a fairytale.

One hour later: maximum sight, no wind, blue skies and coffee-with-milk-coloured islands at the horizon, wherever you look. Enjoy at the max on Padar island. The “wow”effect. Heaven.

Starting the engines again heading for Komodo and Pink Beach. The glassy sea has become a bit more wavy. Deep dark blue. And then the clouds come in and you hear your captain whispering with his mate. Eyes are focused on some particular points, navigating a bit to the left, to the right again, trying to find the right position. In front of us whirlpools of restless sea. Huge whirlpools…

No worries, your captain is used to the mighty and untamed sea. And as this is a charter you will be safe as there is always an island in the neighbourhood to shelter.

But…8 hours on the ferry from Labuan Bajo to Sape (Sumbawa) can become a nightmare. If the weather is too risky boats won’t leave. However, the commercial loss is one thing to consider for the captains and sometimes the safety is on the edge and you could be in hell.

Always check the weather yourself because a trip to Komodo National park can be heaven but also can be hell….

Back in Labuan Bajo again, just back from heaven... 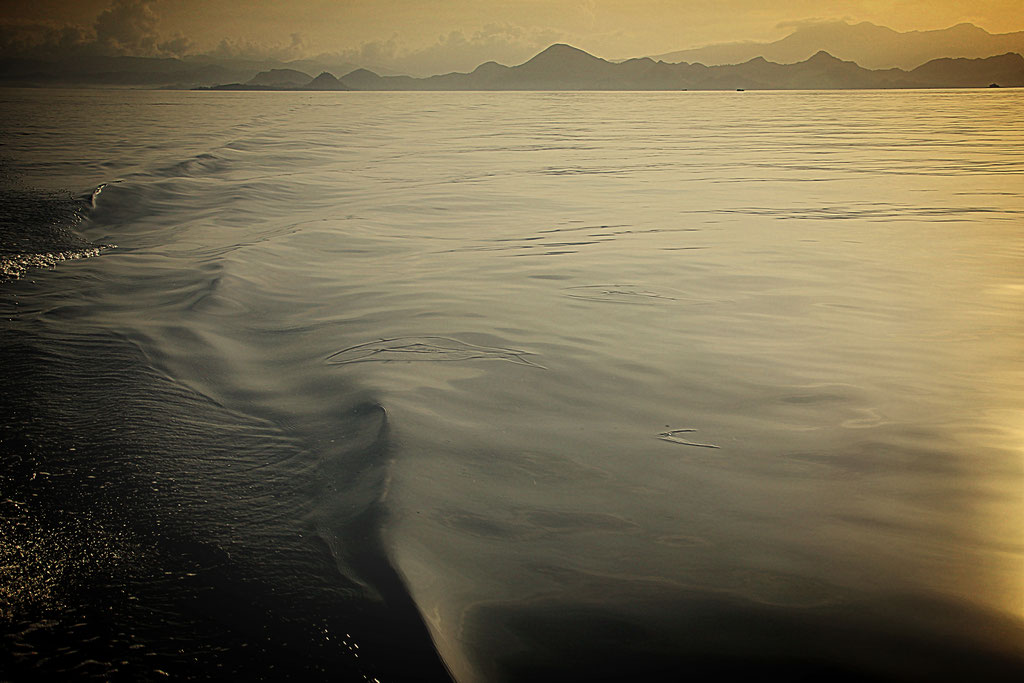 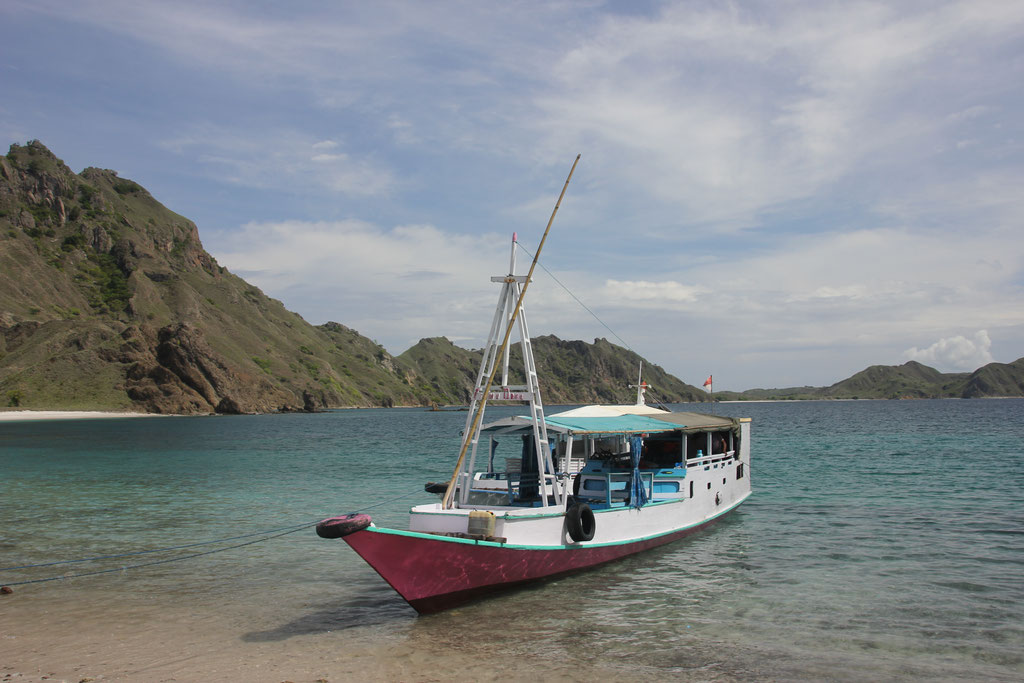 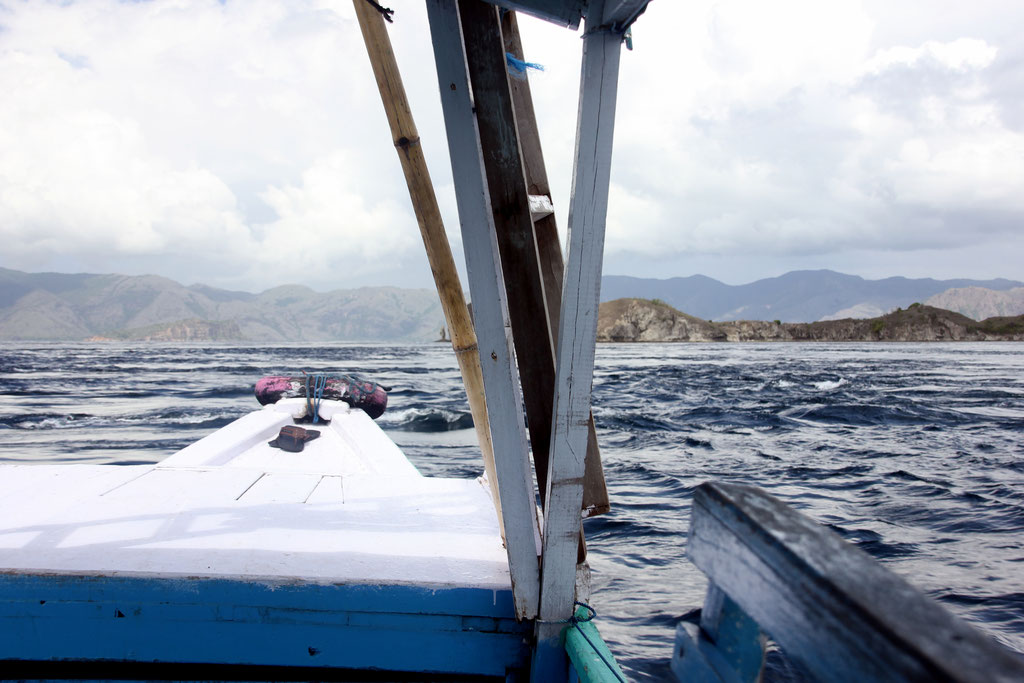 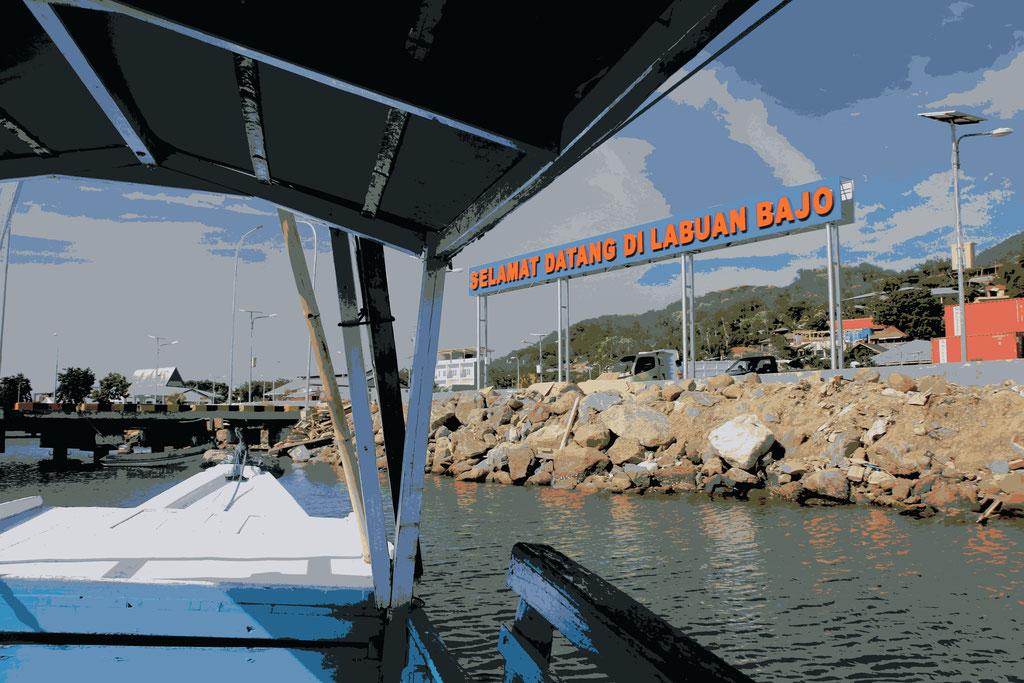 No cars on the parking. Everyone has gone for hours. Most people come here early morning to enjoy the sunrise. For us no sunrise, no wake up in the middle of the night, no danger on the dark foothpad leading through the forest. Birds, insects, forest noises, cool, green, fresh…30 minutes of walking through an empty area and then the movie starts … a “Spielberg like” one. On the right side the turquoise lake, stil about the same colour as 4 years ago. The left one has turned from greenish blue into pale babyblue. The lake at the backside to be viewed from the monument on the hill has become dark green (was black)....

I see your true colors.... The clouds roll in and out, playing with to sun to give us the constantly changing scene. Magic. It’s fiercely cold as the wind blows over the southern part of Flores. Three people only. Walking back to the parkingplace for a cup of hot ginger coffee and instant noodlesoup.

*and this is the song... I see your true colors, performed only a few weeks after the release. 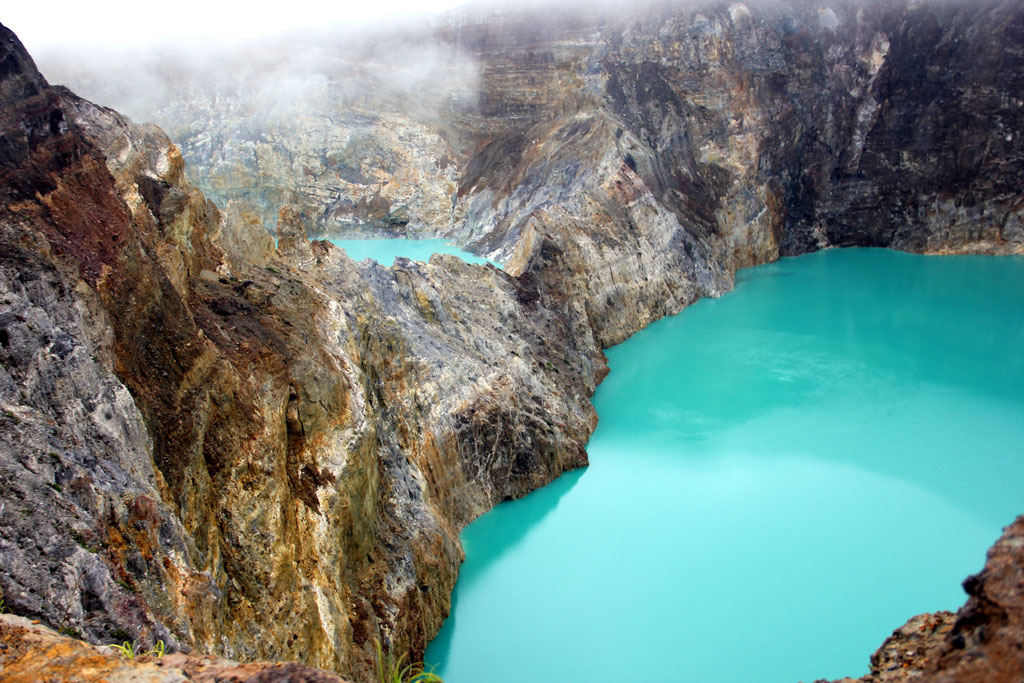 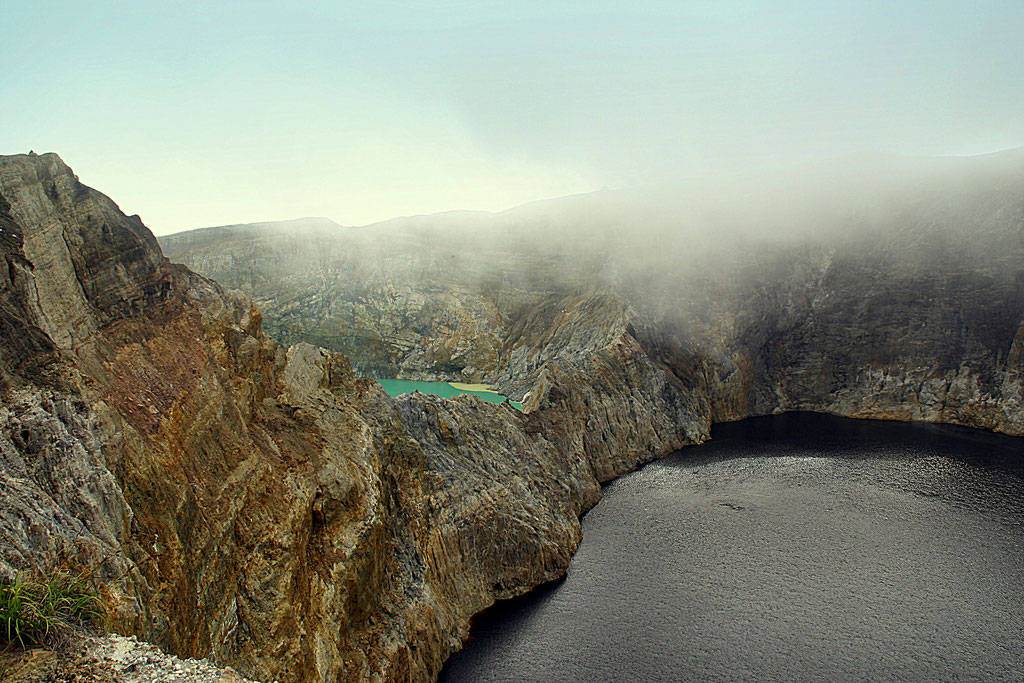 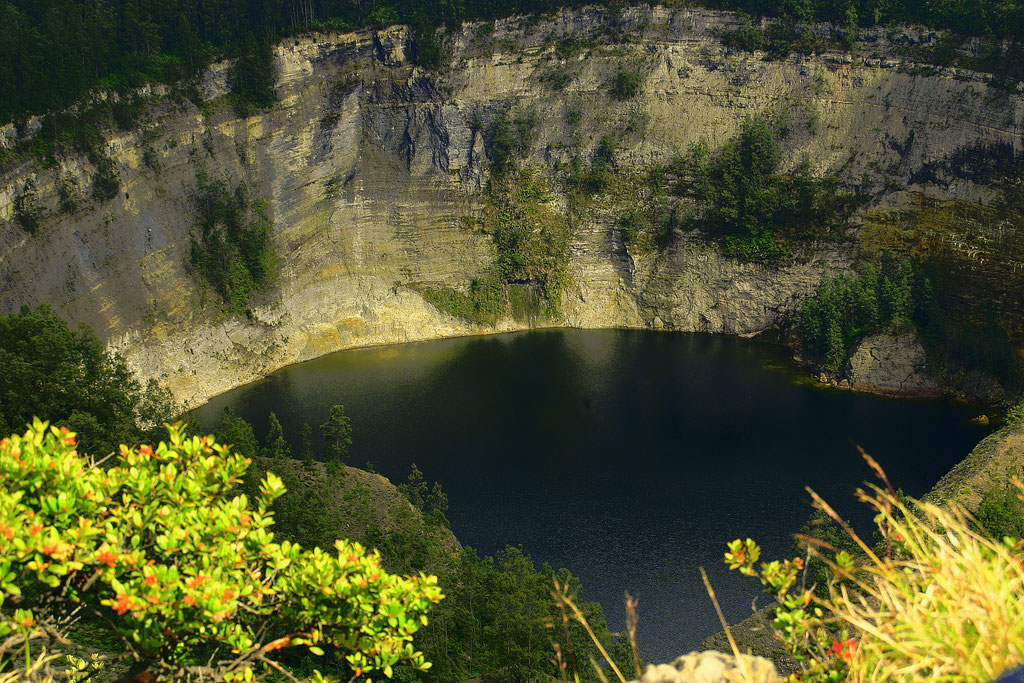 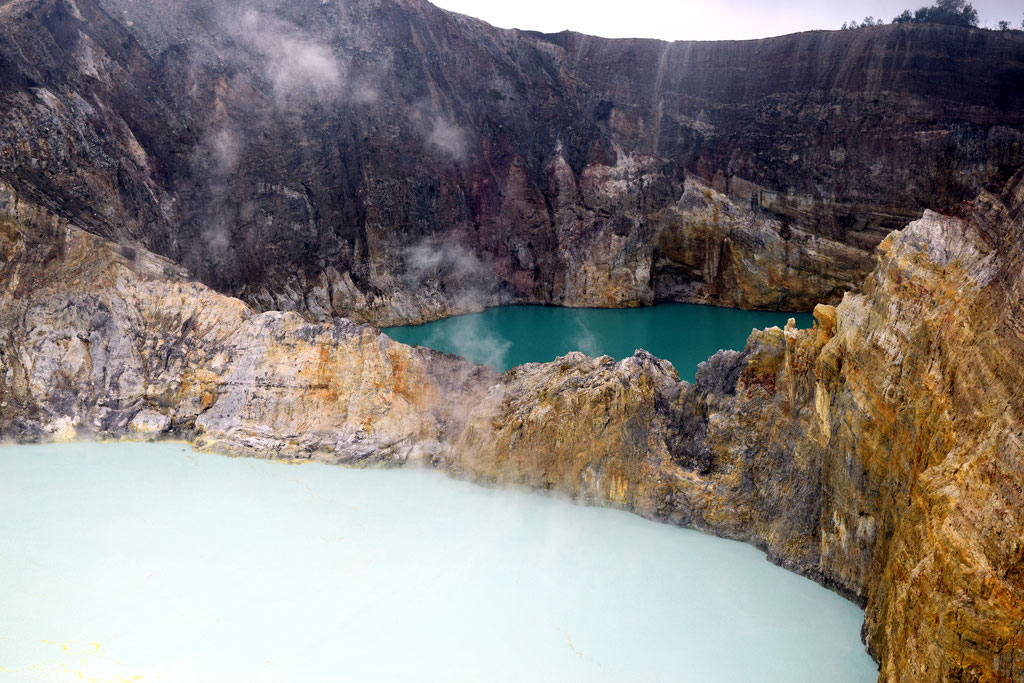 Ruteng is situated on a plateau around 1300 meters above sealevel and is surrounded by mountains. Just some memories of the rain and the hazy mist which is never longer than a day or two away. Have you ever seen the rain? I did, every single time I was in Ruteng...

Arrival early afternoon and rushing to the musicshops to find a few compact discs. No rushing back as the rain set in and keeps me waiting for hours before going back to the hotel…

Coming from Labuan Bajo and stop for the night which is cold and my sweater has to keep me warm after a hot shower… I'm safe with the nuns. Outside there is a shower as well...

Arrival afternoon. At 3 pm the sky is almost black. Lamplights find their way in the misty afternoon. Just in time to find a shelter for the rain that pours down causing small rivers along the sidewalks of Ruteng….

Stuck in the hotelroom with the nuns again on the hill. Around 17:00 pm the dusk colours the small town into brown and black, glossy and shiny from the rain half an hour ago...

16:00 Approaching Ruteng from Reo. No mountainviews as the clouds block any sight and the concentration is on the windy, wet and slippery road with a huge Pertaminatruck in front of us which crawls through the haze and mist...

Already two days in Ruteng with only blue skies and comfortable sun, but today we meet the real nature of Ruteng again…… rain, a lot of rain.

*Want to listen Have you ever seen the rain....? 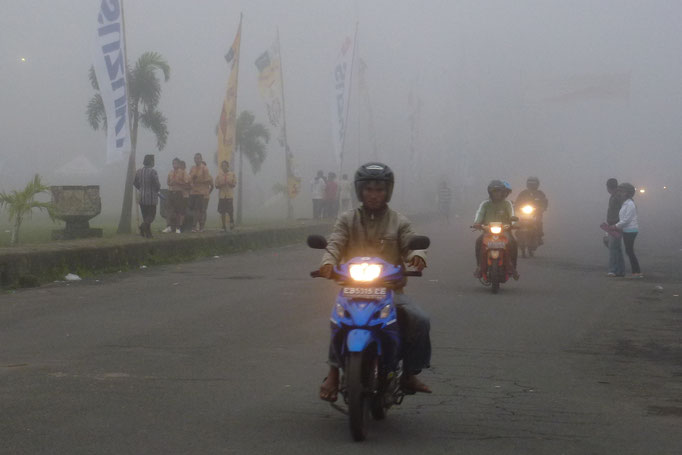 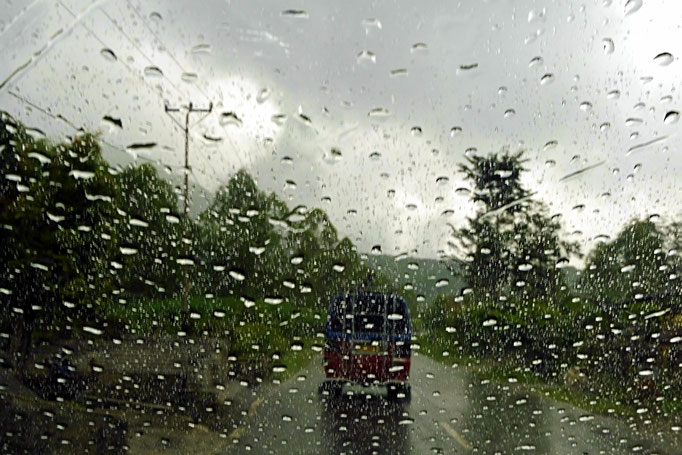 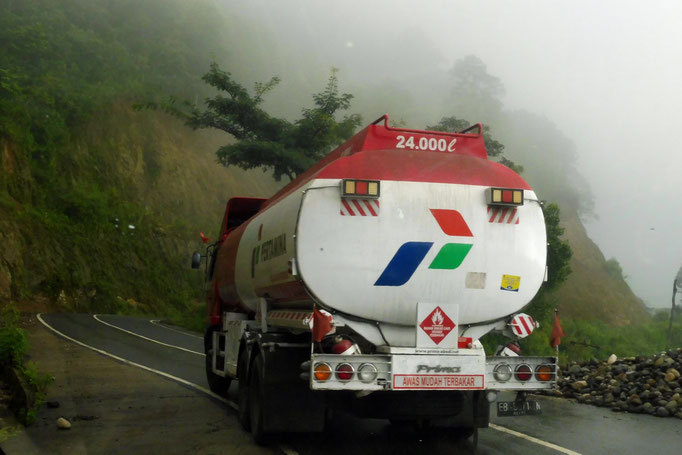 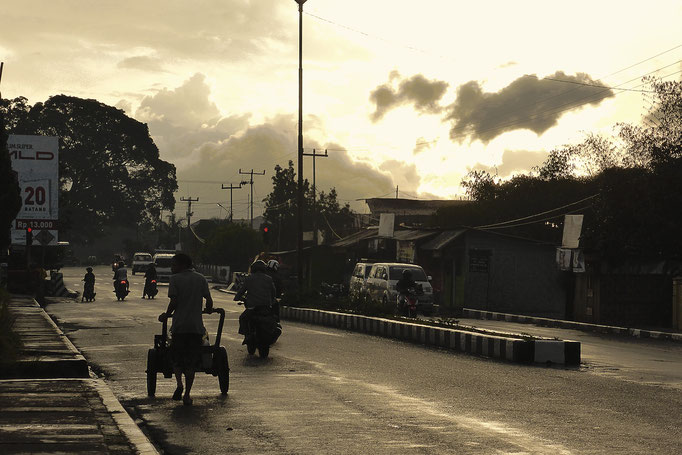 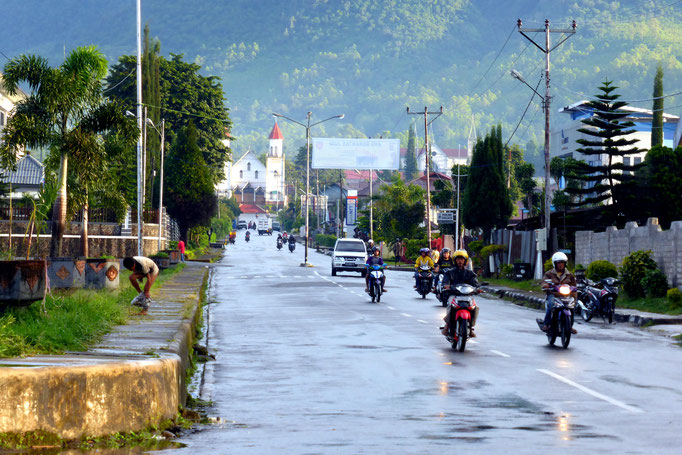 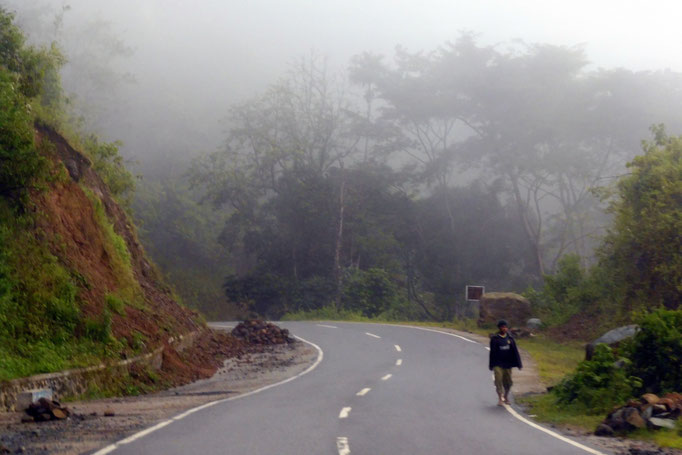 HEY BABE, I THINK I WANT TO MARRY YOU...

The premarriage ceremonies may look and sound like romantic ones but there is also a dark side of the fairytale. Sometimes competition is a prestige and overrules the adat (tradition)
People who want to marry sometimes have to deal with their fighting families and see themselves as the subject and victims of trade. The parents agree, the dowry is paid in buffaloes, pigs, goats, rice, ikat and moke but the demand for a "bonus" will delay the marriage for months sometimes even for years. Often there is a lot of (unnecessary) money involved with marriages (and funerals) which is a heavy financial load for the rest of their lives. Banks and lenders are the winners in this sad stories...

Listen to I think I wanna marry you 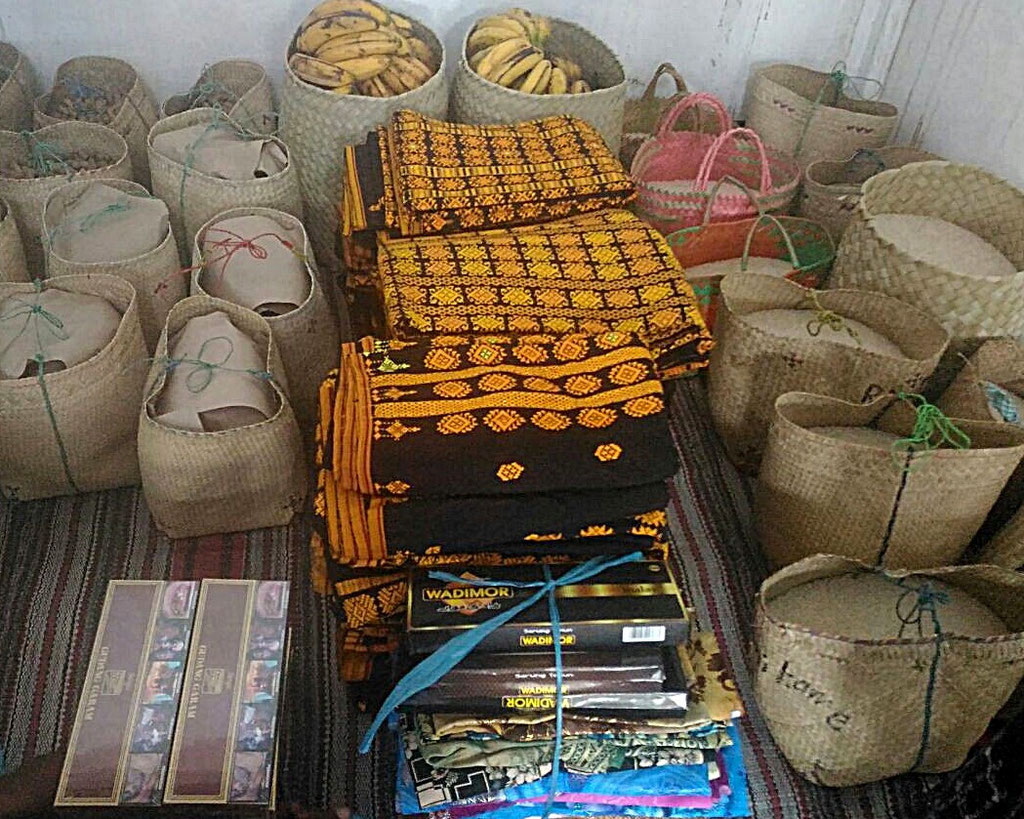 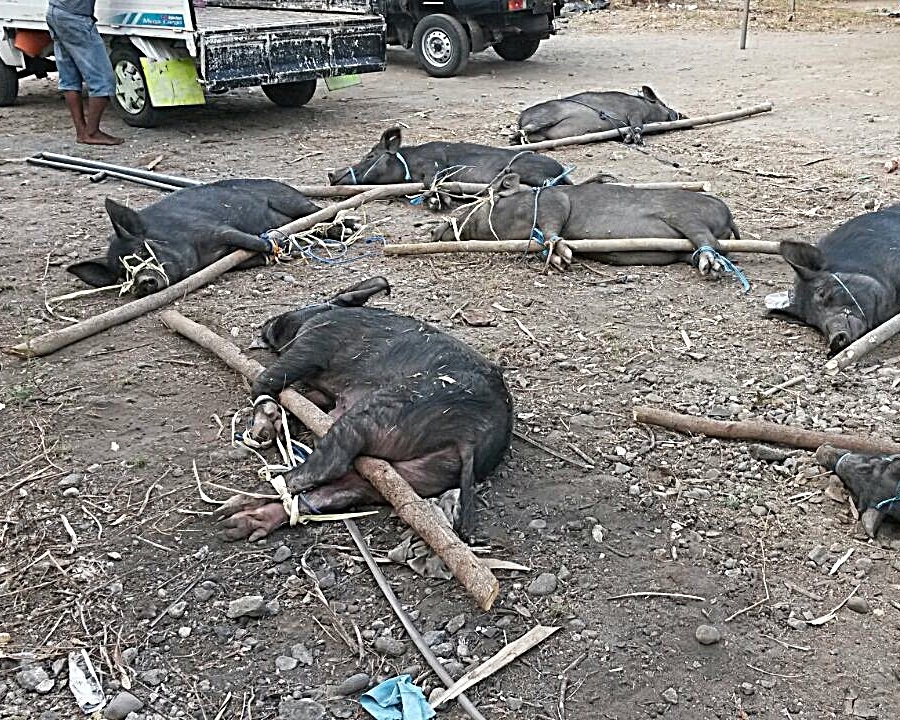 -Daniel Boone-  in the national park of Riung

We have to get up early for the 45 menit drive northwest of Mbay. Today a local fisherman will take us to the National Marine Park, 17 islands north of Riung. Last night we had to buy two jerrycans of solar which should be enough for the journey by perahu motor. As the tide is low and the sea in this area is not that deep we have to wait for an hour. Coffee and roti on this besutiful Sunday.

"I think I'll take a walk in the (national) park"

Around 8 am we leave with our pick up. 8 people, the fisherman, his wife, son and daughter in law and their two small children. The boat is waiting 100 meters out of the coast so we have to wade knee high to reach it. Children on their backs and enough food and drinks with us to feed a whole kampung. This is my beautiful day….. blue sky, the swallow waters of the turquoise sea, flying bats above the mangroves, jumping fish. After one hour we pass the first islands, bush and white sand, birds and seasounds. Parking the boat, dipping in the sea, take a stroll, looking for shells, eat (of course), chatting, doing nothing, admiring this wonderful and peaceful place. Well done Tuhan.

You will feel the sun with this song...... Beautiful Sunday 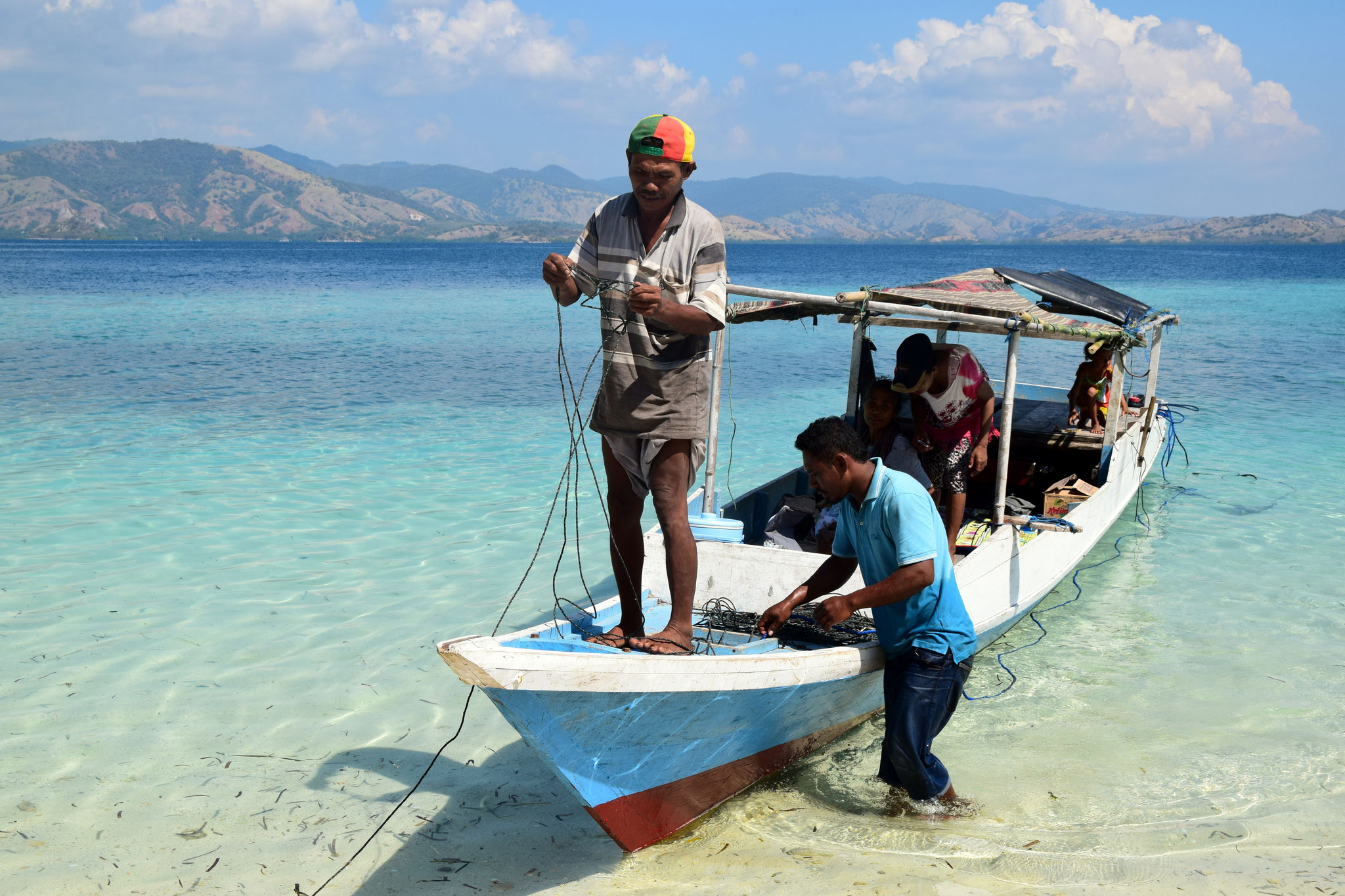 And many, many more

But no blame on Jack who is always patient, caring, handy and able to fix problems on the road or the car or help stranded people.

So hit the road Jack, Janet, John or Julia and find your own hits on Flores, the feeling of uncomfortable hours will disappear by the sun and beauty on your destination (well…. most of the the time).

And.... terima kasih Jack, for the patience. 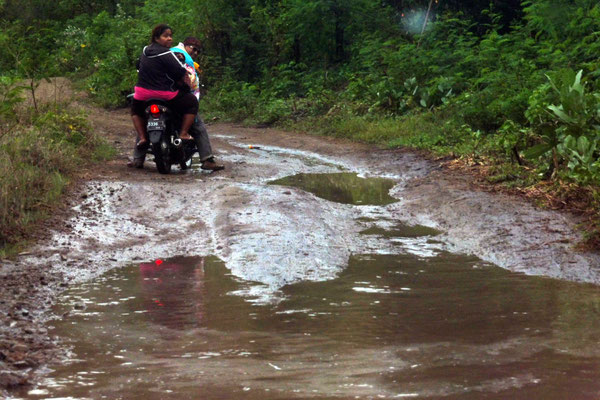 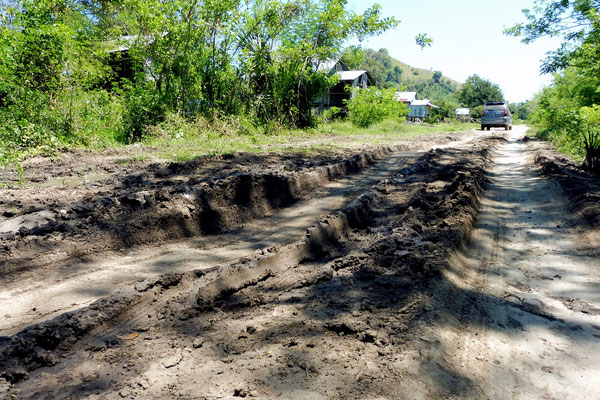 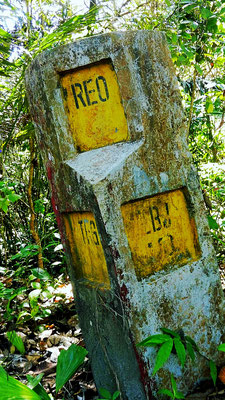 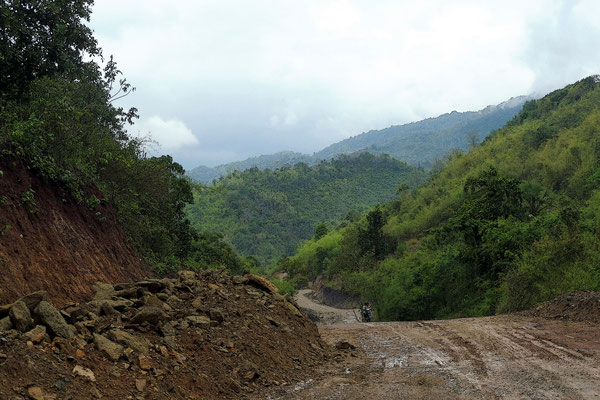 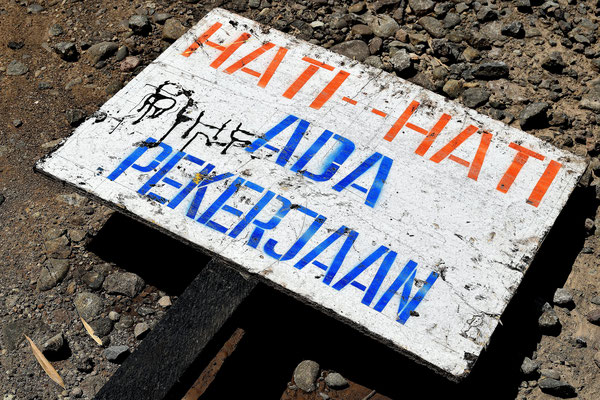 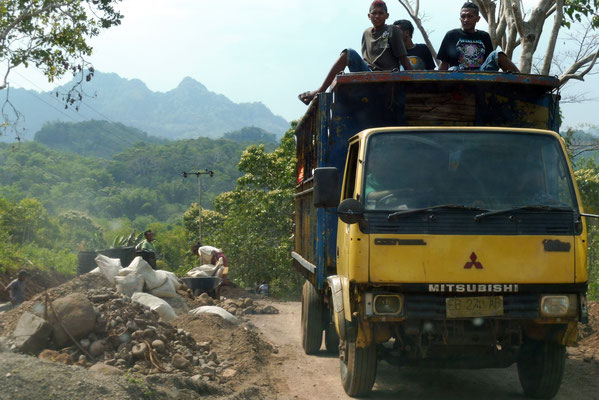 The term 40 shades (or 50) I already used years ago. No grey, although Ruteng can be definately grey when the rain poors down and mist, haze and clouds are hanging between the mountains.

In Flores, and in particular in Ruteng you will see those 40 shades of green.

Enjoy these 40 shades of green although this song is about Ireland... 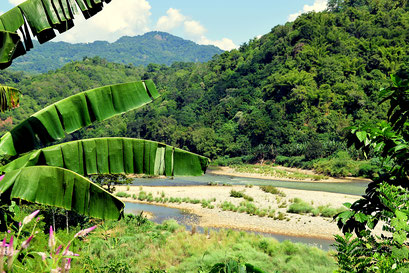 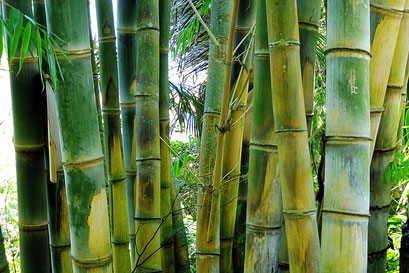 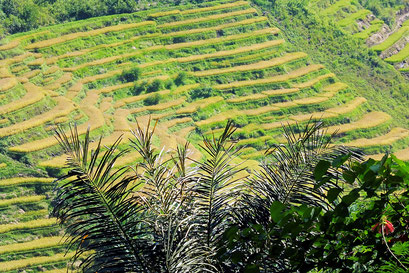 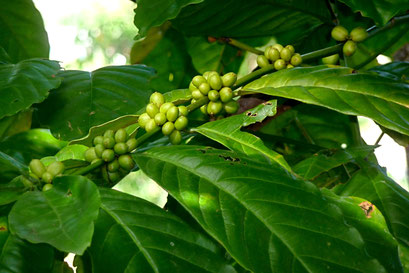 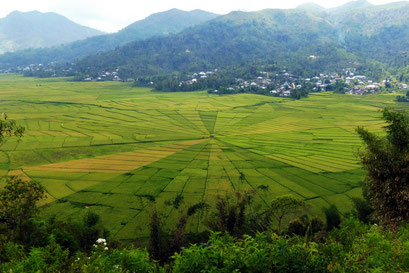 THE END (OF THE STORIES)