Komodo island will remain open for tourists in 2020

After a year of rumours and also an official decision to close komodo island in January 2020 the Indonesian Government has decided to postpone their plans and Komodo island will remain open for tourists.

Flores belongs to Nusa Tenggara. However from the 480 pages of the whole book only 25 are reserved for Flores...

A lot of information is still missing and the eastern part of Flores, eg east of Maumere to Larantuka does not exist. To be correct, Nusa Tenggara is the name of the islands the islands east of Bali starting with Lombok and up and untill the island of Alor.

You can buy the pdf Nusa Tenggara chapter (63 pages which is including Flores) for € 3,50

Komodo island to be closed in 2020

After months of rumours, headlines in local papers now it seems to be official:

Komodo island will be closed in 2020!

Only Komodo Island will be closed, NOT the whole Komodo National Park

Islands including Rinca, Padar, can still be visited. So you can still see komodo dragons in their own habitat.

Aldo from Flores has won The Voice of Indonesia

On Thursday March 28th Aldo has won The Voice of Indonesia.

Aldo, the Flores winner of The Voice of Indonesia

The first time I´ve heard him singing was about a year ago in Dito´s Café in Bajawa and I was touched by his beautiful voice. The Voice of Indonesia 2018/2019 was a great opportunity for him. Aldo is from Naga, a traditional village south of Bajawa.

`Congrats Aldo. I am proud of you. Good luck with your career and may this also put Flores more on the touristic map, especially the interior of th island`

Starting on 22 January Lion Air and Wings no longer offer free check in luggage. Prices for checked in luggage depend on the route.

When buying your ticket you can ad luggage with the amounts of 5 kgs up and untill 30 kgs.

Example: Denpasar to Ende (according to Nusatrip.com)

Paying for the extra luggage on the airport is (much) more expensive.

The cabinluggage should not weigh no more than 7 kgs. Different than before now they are weighing all luggage.

Since the end of December the Pasar Kuliner in Labuan Bajo has moved back again to the original place on Jalan Soekarno Hatta in Ujung (the northern part of Labuan Bajo). Unfortunately they have a prepaid ticket system with vouchers of several amounts starting at Rp 10.000 up and untill Rp 100.000.

On Monday 13th Augustus most of the traditional village of Gurusina (near Bajawa) burned down. According to the latest news only 6 houses have been saved. As far as I know no personal accidents. A double disaster for the villagers as (low key) tourism was a part of the income of the community.

Gurusina is one of the three populair traditional villages close toe ach other. The other ones are Bena (the most famous one, once UNESCO nominated) and Tololela.

I hope travelers will take some time to pay a visit to Gurusina for a small donation so that they can rebuild there homes again. 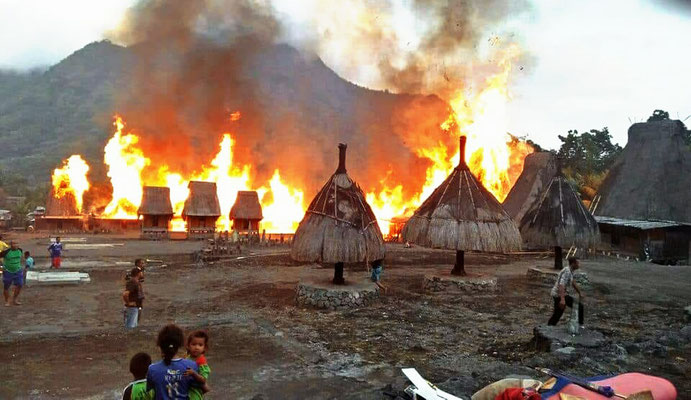 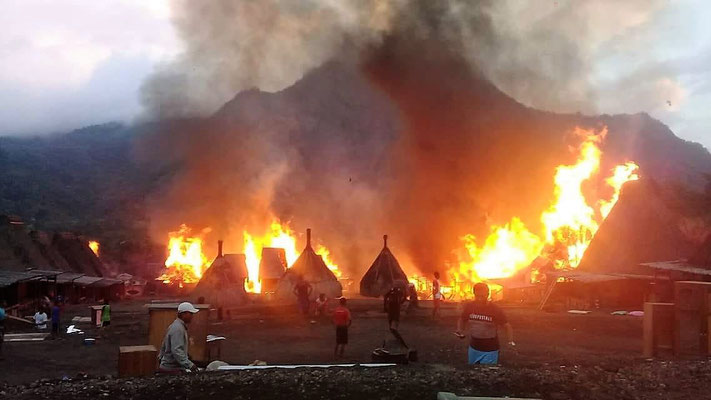 No more blacklist for Indonesian carriers

"All Indonesian carriers have been removed from the European Commission's airline blacklist, more than a decade after a blanket ban on the Asian state."

So travelers can use carriers like Sriwijaya, NAM Air, Transnusa and Wings with confidence, And of course Garuda and Batik Air also.

For flights to/from Denpasar - Labuan Bajo and Denpasar - Maumere NAM Air is a good alternative as planes are bigger and faster.

Suggested trips (which can be downloaded/pdf)

In the sector "planning" I have added 9 trips in pdf file which can be downloaded. However these are just examples. You can contact me for tailored trips via email or Whats App. The trips which include Wae Rebo are still in progress as last month I have found some alternative roads for Wae Rebo. I will add them before the end of June. Please be patient.

Carrier Transnusa which operates on Flores has reduces her luggage allowance from 15 kgs to 10 kgs since 14 May 2018. Be prepared for additional costs.

Labuan Bajo and the projects that never end

As for a result of increasing tourism Labuan Bajo is in a state of many projects already for some years.

The Pasar Kuliner has moved temporarily a few hundreds of meters inland. At the moment a big hotel is being built in the harbour area and finally they are building a real sidewalk from Ujung all along the Jalan Soekarno Hatta.

And beside that many new places are being built like hotels and restaurants. So the town is one big construction site at the moment where safety is'nt always guaranteed.

Plastic not so fantastic

Indonesia is after China the number 2 in the world when it comes to plastic pollution of the surrounding seas. It has the attention of the government but sometimes you have to show the world the real impact. This video went around the world.

Although this video is made on Bali, the whole country and many tourist destinations like Bunaken near Manado (also Manado itself) suffers from plastic pollution. Also on Flores the seas are polluted, however not as heavy as in some other parts, except for the seas and beaches around Labuan Bajo which are the worst of the island. The following article is zooming in on islands east from Bali including Lombok, Moyo and islands of Komodo National Park.

If you want to communicate with your relatives via sms or you want a 24 hour acces to the internet buying an Indonesian simcard is by far the best/cheapest way. These simcards for Rp 10.000 only can be buyed almost at every corner of the street.

However, due to a new regulation starting on October 2017, all prepaid simcards with indonesian telephonenumbers have to be registered. Also for foreigners, also for tourists!

Registration for tourists can only be done in person and with passport.

This means that with the new schedule (only during European summertime) the flight Amsterdam - Labuan Bajo via Jakarta has a good connection (departure Labuan Bajo 10:50) and therefore from the Netherlands Flores can be reached in less than 24 hours (=next day).

Batik Air is a reliable carrier and offers a competitive prices comparing with Garuda.

At the moment on Flores the Cikungunya virus is active. The virus, locally known as malaria variety (which is not) is spread by mosquitos. There is no preventiondrug. Symptons resemble those of malaria (high fever, headaches, joint pain)

With Pelni to Komodo NP

Pelni offers a 4 day trip to Komodo NP on one of the Pelniships Tilong Kabila. The trip is from 1-4 December.

The website is not very clear about other dates/departures in the future.

Garuda has started direct flights from Jakarta to Labuan Bajo

Check your dates of travel on the  calender