Capital (ibu kota) is Maumere, the biggest town on Flores. Here, the distance on Flores from north to south is only 15 kilometers. Maumere has a good beach scene east and west from town, which is popular during the weekends. The seaport (Pelni and cargo) is northwest of town. The ASDP seaport is in Kewapante east of Maumere.

Maumere has many hotels also on the beach which stretches east and west from the city. From basic penginapan to luxurious resorts

There are many Padang restaurants and Jawa eateries. There is Ikan bakar (grilled fish) which is supposed to eat with your hands, near the port and in the evening are warung set up near the river. Roxy is an useful supermarket.

On jalan J. Sudirman nr 1 (the road to Larantuka) there is a wineshop where you sometimes can buy imported liquors like Johnny Walker, Bacardi, Chivas Regal, Absolu Wodka etc. Wines are mostly from Australia and Italy and imported via Bali and prices start at around Rp 300.000. Unfortunately they are also out of stock from time to time, but if you are in the neighbourhood you could try your luck.

The airport Frans Seda or Waioti is 5 km east of town. There are direct connections with Kupang, Makassar and Denpasar (Bali).

At the airport or via your hotel are cars with driver available. Prices vary and a price of one million per day is not uncommon. Booked via hotels be prepared for steep prices as well. Within Maumere the price shouldn't be no more than Rp 600.000 per day, if you go out on a daytrip for example as far as Kota Baru, Waigete or Doreng beach the price should be around Rp 700.000. For overlandtrips prices are usually higher (as the driver needs to overnight as well).
If you need a car you also can contact me. Also check car with driver

A ride should be between Rp 3.000 and Rp 10.000 depending on distance and your negotiation skills.

Sorry, no real taxi’s in Maumere but cars are available from the airport into town and to the airport from bigger hotels (like Sylvia or Go Hotel). A ride into town should be no more than Rp 60.000.

Ferries ASDP  (KMP Uma Kalada) to Larantuka, Adonara and Kupang (but not very convenient as the harbour in Kewapante is on the northcoast, 15 kilometers from Maumere) 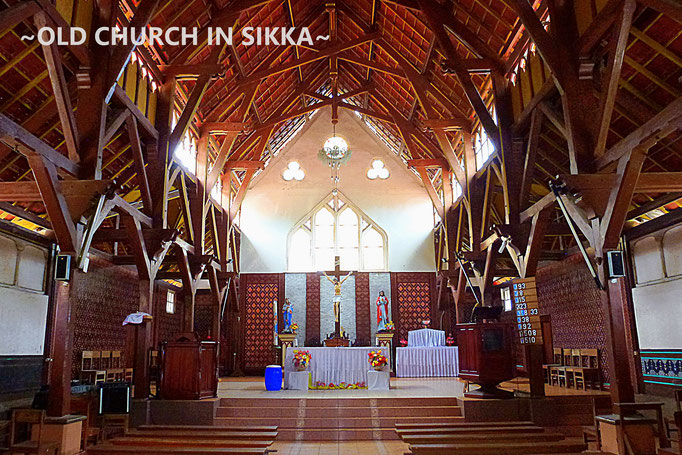 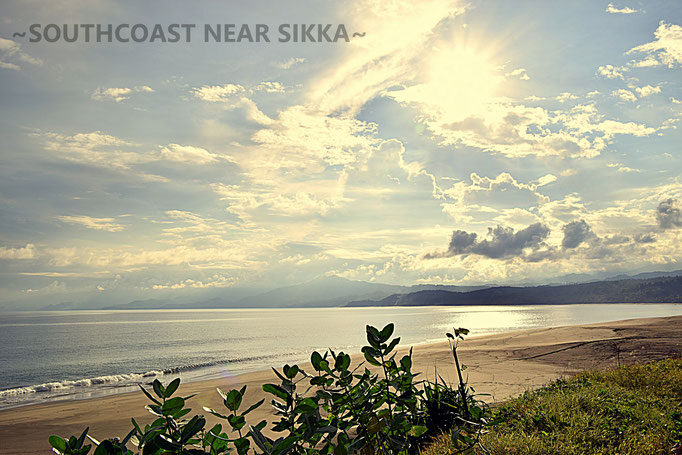 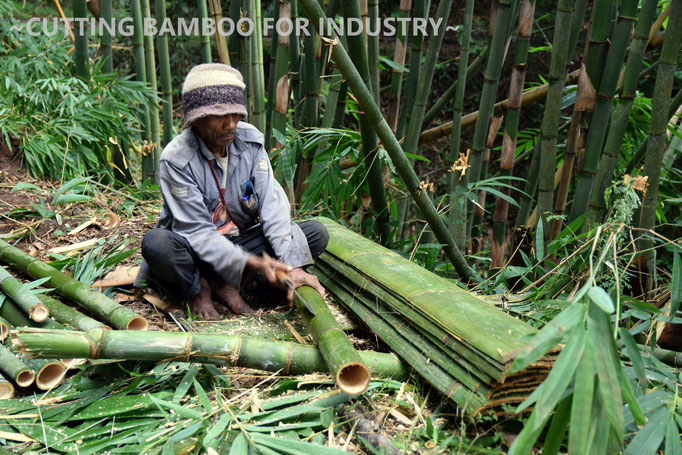 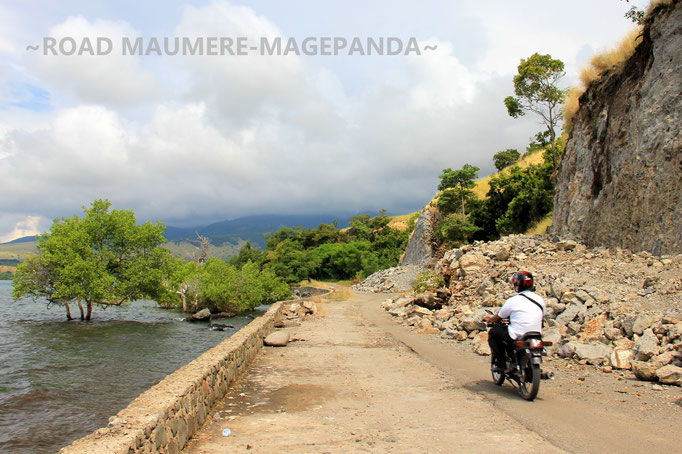 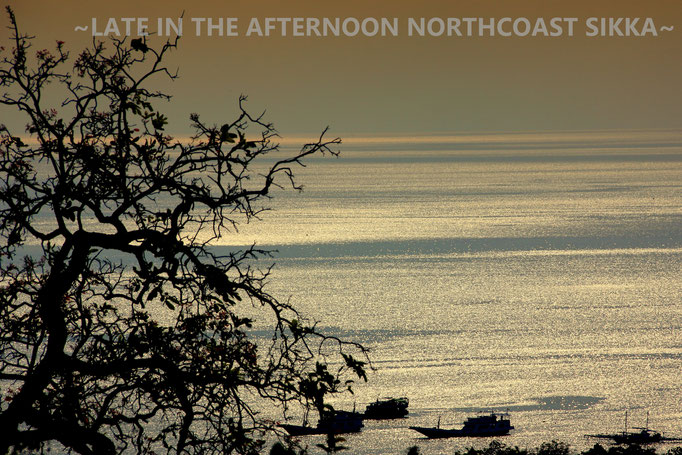 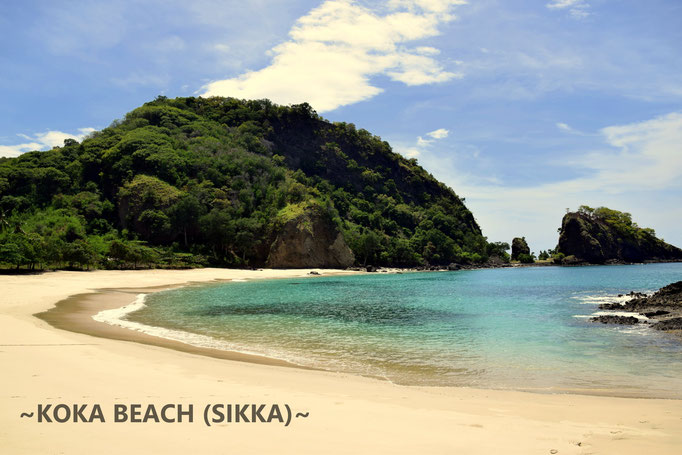 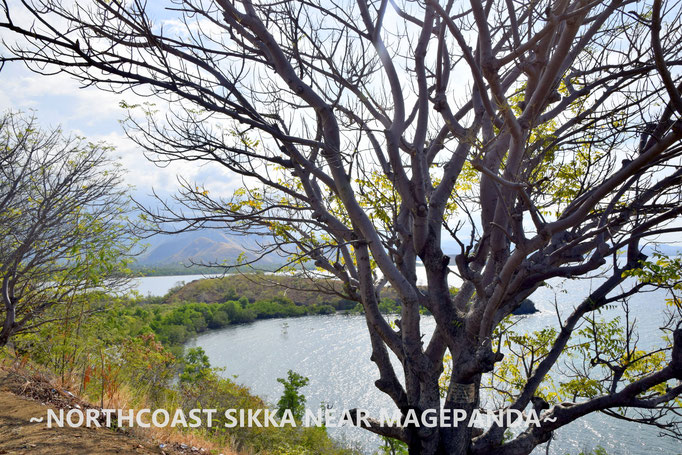 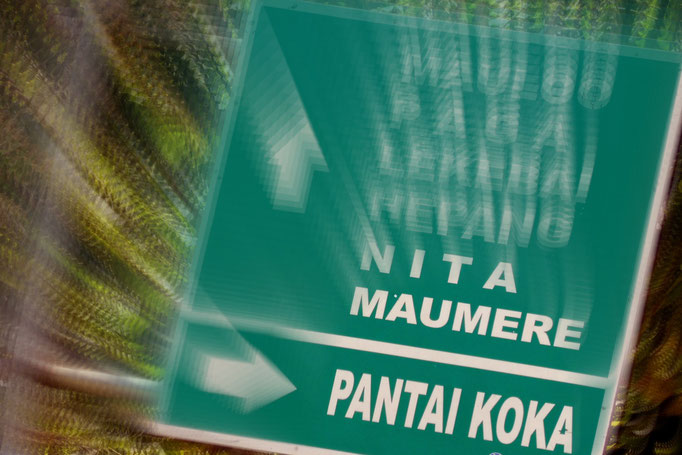 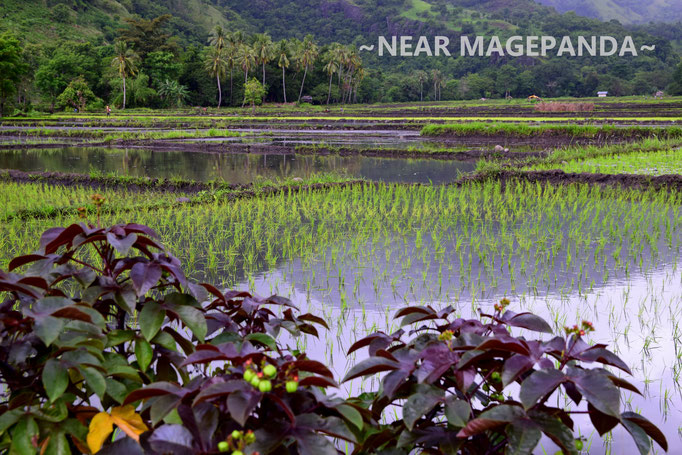 Two villages, about one hour east of Maumere where you can see ikat weaving, traditional dances and try betelnut.

This is a muslim village (kampung) with houses on stilts in the Flores Sea, a few kilometers west of town. You can see village life here along the shore of the north coast and even a mosque built on water. Take care if you wander around as the small sidewalks are broken and not so steady. To get there take the road in the direction of Magepanda and follow the sign. Children will follow you asking for candy and ballpoints and ... money.

Road to Magepanda (and on to Kota baru)

This road with sea- and mountainviews is an attraction itself especially the views around Wair Nokerua. Also an interesting spot for sunset. Further west there is a lake near the coast Tiwu Bowu (Ende regency) and a nice beach just beyond. Travel 30 minutes further west and you will find yourself in a beautiful river landscape.

The huge statue of Mother Mary on Nilo Hill is overlooking the valley. Half an hour drive from Maumere and good to combine with a day out to Sikka, Wuring and Magepanda. From Maumere go south following the road to Ende, the junction is on your right. The small road crawls into the mountains. There is a parking for cars and motorbikes. At the time I visited Nilo there was nobody around to pay a fee or something like that. Probably you also need to buy and burn a candle. If the weather is good there are some fine views overlooking the area and Maumere town.

Doreng Beach
This beach is only 40 kilometers south east from Maumere but it will take easily two hours to get there. Seldom visited by foreigners and far from the beaten track.

The town of Sikka has an old church (1899) and is 30 km from Maumere. Follow the road to Ende to get there. There is a large sign on the road (turn left). If the church is closed they will open the door for you. You can leave a small donation. Sikka is also known for its weaving cloth.

Following the road further west you will first meet Paga Beach where tourguides or drivers intend to stop for a break. You'd better travel a little further to Koka Beach (2 km off the Trans Flores highway) with the big black rocks just to soothe your hunger for taking photo’s. This is one of the prettiest beaches of Flores and outside weekends you will have the beach, which are in fact two bays, for yourself. You also can overnight on the beach in basic accomodation. See the hotel section.

Pulau Besar, Kojadoi, Pulau Pengabatan
From Nangahale (1 hour from Maumere) you can take a boat to Pulau Besar. The tiny island of Kojadoi is connected with Pulau Besar via a stone "bridge". Pengabatan island is a good place for swimming and snorkling.
The charterboat from Nanghale is Rp 600.000. You best can start in the morning around 9 am.

The area north and north east of Maumere is famous for diving, especially around Babi island, pulau Besar, the Pemana islands and Pengabatan island.
East of Maumere in the area of Waigete (30 kms from Maumere) are guesthouses to base yourself.